A magical sunset in Menorca

If you want a really special, unique and surprising plan then why not choose the Cova d'en Xoroi. It is a legendary natural cave that opens in the small Cala d'en Porter, in Menorca, and offers one of the best viewpoints of the Mediterranean. A place to escape as a couple and marvel at the beauty of this turquoise blue water. The cave has been used as a bar for more than half a century and, little by little, it has become the most exclusive chill out bar, which it is a perfect location to see a magical sunset in Menorca. 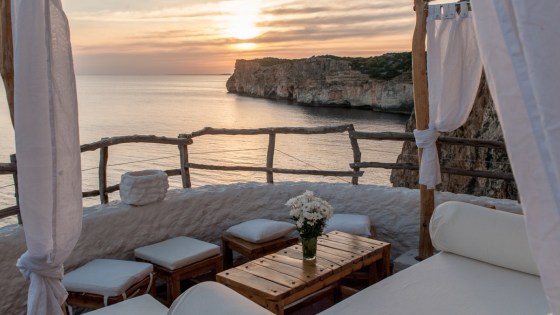 The subject of reports and specials segments in international magazines, the Cova d'en Xoroi has evolved from what was initially designed as a disco on the cliff of Cala en Porter to one of the most romantic and select places on the island.

Its perfect location on the seafront, just in front of the island of Mallorca, which can be appreciated perfectly on the clearest days, means it also boasts the most spectacular sunset on the island of Menorca.

Its magic is not only due to its incredible location but also due to the legend that accompanies this cave: it is said that the pirate Xoroi, was stationed there (others point out that he was Arabic). The mere presence of his figure terrified the Menorcans, during those times of Arab colonisation and it is said that there was only one group of brave men who set out to stand up to him. 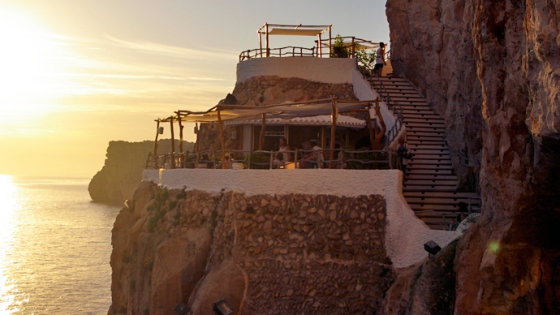 Finally, after reaching the cave (through the very complicated access point), they managed to corral the pirate who, apparently, threw himself and his son into the sea to try to save himself. After that, he was never heard of again and his lair has become one of the most well known and most visited places on the planet.

News for the 2023 season at Prinsotel La Caleta

We continue with the news for this 2023 season, now it is the turn of our hotel located in Menorca, more specifically Prinsotel La Caleta in Cala Santandría, located just 15 minutes from the center of ...

The opening dates for the 2023 season of Prinsotel hotels

The news for the 2023 season at Prinsotel La Dorada

We have already started the countdown for the opening of the hotels, at Prinsotel we continue to bet on the renovation and modernization of our hotels. We are very excited to share with all of you the ...

In order to offer you a better service, this website uses cookies. By continuing browsing the site, you accept the use of them. More information OK